SARA CANNING AND THE HOAX FOR GAY MARRIAGE

Three months after the Lyra McKee hoax, I take a look at one of the main actors in the hoax, to see what she is up to, and how she is benefiting. I look at the primary purpose of the hoax, and the implications for Northern Ireland.

Canning first came to prominence with a ham-acted performance on the podium in the pretend vigil for Lyra McKee, less than 24 hours after the alleged incident. Sara did her best to convince the world she was grieving, while reading her script from a mobile phone. Her performance was thoroughly unconvincing, we did not buy the pretend choking up. 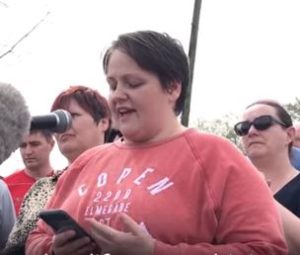 She 'challenged' politicians, who are also in on the hoax, to introduce gay marriage, thus the reason for this hoax on the people of Northern Ireland - they are manufacturing consent for gay marriage. The tactic is to pull at the heartstrings of the people of Northern Ireland, and they are especially looking to hook anyone, who is on the fence, to want it for poor wee Lyra. Canning had her propaganda published in the Guardian, a trash paper, that works with Leona O'Neill, who thinks she can shut me up. Think on, this is never going to stop. Keep laughing while you can.

Gay marriage, which will be forced on the people of Northern Ireland, whether they like it or not, whether they vote for it or not. I have no faith in the voting system, it's a survey, a means to placate the people, to make them think they have a say, while they do what they want. It's a rigged reality, but we can still take action. I do. This is not happening on my watch, I will fight for the children of Ireland.

This is a witch that the people of Ireland need to wake up on, for the sake of the children, who they want to brainwash, and influence, as early in their life as possible. This teaching is on the way for primary schools. It's a government agenda and you won't recognize Ireland in 20 years time, when half the children will be turned gay. It's nurture not nature, they know how to do it.

LGBT is an anti-female, anti-family agenda, and there may come a time when it is too late to stop these people, as the older generations die out, and voices of sense are lost, the population will be deeply controlled and Old Ireland will be gone. Don't let these people away with it, you can see what they are doing. Don't let it happen. Fight them, they are small-time bullies and they are cowards and they fold quickly under questioning.