EXTINCTION REBELLION ARE A SATANIC GROUP

The group known as Extinction Rebellion are a satanic group set up to work with the government, to trick the masses with false teachings about the climate, to put fear and anxiety in the minds of people. They never leave out signs and symbols, to let you what they are about. 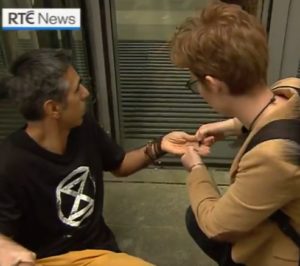 Pretending to be glued to a door, they are promoted by the media.

They hypnotize the youth especially, who are tricked into shouting for the government to tax the people. It's why they use the Swedish child Greta Thunberg to push their agenda, and that kid often wears plaid, for freemasonry, it's not an accident. Anyone gullible will be taken in by this group. They are promoted by the media, promoted by people who are down with the devil work, and all about tricking the masses. You will see more journalists than ER members at their pretend protests.

The protests they perform, are rituals. They talk about spilling the blood of children, they wear white to signify an innocent child and they use red paint for blood,  why do they have to mention children and blood letting, because it's devil talk, this is how they carry on. 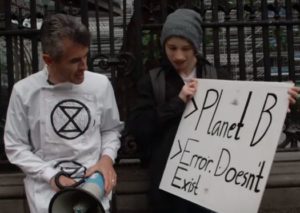 A satanic logo and false teaching in Dublin

Their signs and symbols go unnoticed by a public, decensitised by Game of Thrones, and fantasy in general. Deep programming ensures that people do not question what they are looking at, they are so used to seeing it. They like to use the one eye symbol for their one-eyed god, they like to flash 3 6s on the hand, and they like showing horns for the devil.

Their logo is devil work , it's an X, it's an up, and a down pyramid, like the so called star of David, it symbolizes as above, so below, meaning as in heaven, so on earth, which you might think sounds okay, but it's two fingers to the almighty, and them saying they will control earth. That is the meaning of the sign, that is what you need to get. These people want to brainwash the youth, the naive, the gullible. They are here to deceive the people. They are supported by the lying media, who like to mock the people.