Millions of people have been fooled by Arsenal players - Mesut Özil and Sead Kolašinac's attempted robbery hoax, but it is not hard to spot the chicanery if you look properly at the evidence, because the CGI is shoddy and it shouldn't pass anyone. But it does pass a lot of people because they trust the news, they take it and run with it, they believe what the are told without question and they enjoy drama, a lot. 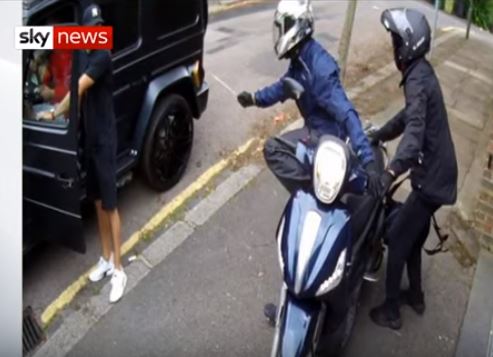 Different sources for images
The first thing to notice is the difference in quality between the Sky News still image (left) of the moped rider dismounting, and the video images. They are from different sources. They next thing which makes it obvious it's a hoax is the shaky camera, this shouldn't be with a robotic or rigid security camera. It looks like a mobile phone was used in making the video.

A doctored image of an unlikely scenario
In the still Sky News image, see how big the person jumping off the moped is, compared to Kolašanic. Look at him leaping towards Kolašinac, the momentum would mean he would jump straight into Kolašinac or the vehicle, it makes no sense, off-balance, he could easily be held down. And we are expected to believe that Kolašanic was just casually talking to Özil and didn't even turn around to see a moped just parked right beside him? It's a doctored image. The motorbike is also out of shot when he closes the door, it's farcical. And what kind of knife is he meant to be holding because it looks like a wand, who would carry such a thing riding a bike? It's CGI. 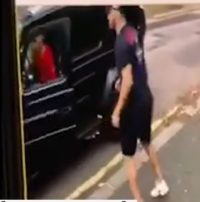 Özil calmly drives away and leaves Kolašanic behind
How about Özil, he never breaks a sweat, see how calmly he drives away as if there was nothing going on. He casually looks for traffic and slowly pulls away, there is no panic at all. Kolašanic is dancing all around the car like a madman and Özil doesn't notice. 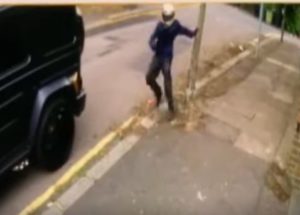 Footballer becomes motorcyclist
See how the motorcyclist lands at the post, how he grabs it and does a skip to his right to evade Kolašanic, does it look like the action of a crazed knife-wielding-thief or does it look like someone attacking the goal mouth while Kolašanic defends? It is a football match and they are jostling, no one is being attacked with a knife. And the same 10 second loop is repeated over and over because that is all they have. 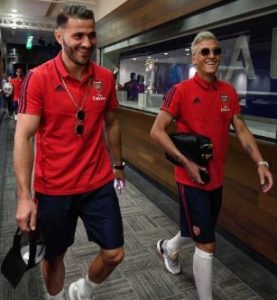 A joke on the people
Özil tweeted this image of the two laughing later, saying they were fine. Of course they were fine, and we know why. And the restaurant, who got free advertising, hammed it up too, saying Özil was chased for 10-15 minutes...that's coded...1+5=6. They never leave out the signs and symbols and they love including bricks, talking about throwing them, as well as showing them. Bricks for freemasonary, bricks for chicanery.

Propaganda for the masses
Sky news say Kolašanic "can be seen jumping out of the vehicle to confront the masked aggressor." This is just a lie, Kolašinac is not seen jumping out of the vehicle, a person is seen standing outside the car, apparently talking to Özil and notice how their faces are blocked by the sky logo on their photo, no accident. All parties, including police, work together to hoax the public, all the time, it's a rigged reality. Here is the Sky News Link