LAZINESS AND A WITCH IN LEITRIM

Old Ireland is being replaced. We are being out-populated by immigrants, and the gay agenda is being used in tandem, aggressively,  to control the population, to destroy our country. It is being done by the Irish government, a gay government for the gay agenda. We all know it, look at the minister for children, who is not even Irish, and Leo Veradkar, who is in the position of taoiseach, because he is gay, that is his qualification, why he was selected.

The gay agenda is anti female. It's an anti-female government. You need to stand up for women and children. I can't believe you all agree with this and you are afraid of being called names by the likes of Leah Doherty. 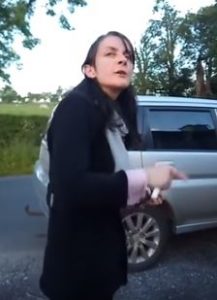 Leah Doherty - A witch with a wicked agenda for Ireland.

You must be sick of LGBT, I know I am. You are being had, and manipulated by this witch and her gang and their gay agenda that they want to indoctrinate children with. I'll deal with her, no problem, but you need to do something.

I know a lot of you will be smart enough to see what is going on. It would easy to assume fear, the reason for not speaking out, but it's worse - laziness is the reason. I know people are not afraid, they are lazy. They do not want the hassle, out of laziness.

Leitrim/Roscommon - you are saying nothing out loud, I can't hear you. All I can hear is this witch. Don't let Leah Doherty be the voice of your community, you see how she attacks people by putting labels on them. Don't be bossed about by this  witch. You know what she is doing, you can see it, it's being rammed down your throat. Irish culture is being destroyed, at pace.

Leah Doherty has no intellect to speak of, nothing to say, not that smart. I listened to her on youtube, she is dopey, and what a nasty tongue she has. She loses her temper because she cannot argue, she is thick.

These people shout and name call to scare others, to stop others speaking out. They haven't a prayer against me.

Leitrim takes the headline today, but laziness is a nationwide problem in dealing with tyranny. People will use every excuse under the sun not to act. People are so lazy they will roll with whatever agenda is foisted on them, just glibly agree, for an easy life. They prefer an easy lie to a difficult truth, they couldn't be bothered, they want to relax and leave the work to someone else, and hope it gets done for them. They say nothing, they do nothing. Lazy.