Oil was developed in a lab. It is not a natural product but it is sold to the masses as a naturally occurring thing, which can be found beneath the ground, this is not true. There is no oil underground. It is a hoax that there are wells of oil underground, trapped and waiting to be tapped.

Oil is produced from scratch, above ground, at oil distilleries, which are usually close to the supposed drilling point.

A fountain of oil, stemming from the ground, is done with a little engineering. Oil is pumped from an oil reservoir, above ground, through a pipe, and gushed out from the ground, to a cheering crowd. That's how it is done, it's a trick. 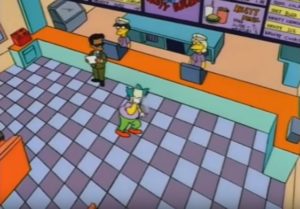 Krusty the Clown looks stressed on his new oil rig branch of Krusty Burger. It's no wonder.

And why would there be oil under the ground...when you think about it, it's a ridiculous notion. Why would God put black liquid under the ground, hard to find and hard to get to?

Oil rigs out at sea are a joke. They do nothing, no business, they are just for show, to fool the masses. When the Simpsons showed a Krusty Burger joint on an oil rig, that is what they were saying. It's an in joke, and a coded joke for those with eyes to see a checkered/diamond floor and orange counter.

Natural gas is a hoax too. Gas is made above ground. You use chemicals to create gas. Throw chemicals into a can, seal it off, and you have gas in a can, It's not difficult to make. It is not sourced from under the ground. Gas underground is a ridiculous idea.

Oil and gas are easily produced, they can and should be cheap to use. Knowledge is power. This industry secret should be public knowledge. There is no oil or gas underground.