These photos show you why it will be cloudy in Ireland on June 22. I was up at 5am, and apart from some birds singing, all I could hear was a jet thundering across the sky. You can see what it was up to. Then a second jet appeared, look at what they did. 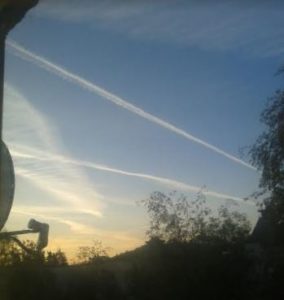 5:30am: It was a beautiful blue sky before these jets arrived.

At the dawn of the day you can see them, bold as brass. Watch them make clouds. They can make it completely cloudy in an hour. Blue sky gone. They have been doing it for years, for donkey's years, but now people are waking up.

Look up Ireland. They are blocking the sun, that is their basic goal, a bit like Monty Burns in the Simpsons. Your government is in on this. They laugh at people who believe in Climate Change, which is CC, 33, a hoax for the people.

They brainwash the people. They target the youth and get them to shout for what the government wanted all along. That is how they do it. All to plan, unfortunately there are too many people who have no clue how they are being played, and they are begging the government to take action, to tax the people. 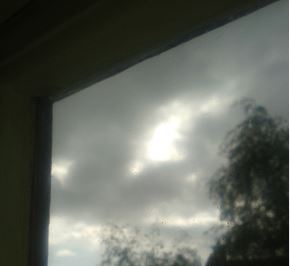 9am Cloudy and grey.

RTE can tell you when and where it will be cloudy and how bad the weather will be, because they know how, where, and when it is done. RTE invite minister Richard Bruton to sell climate change to the dumbed down masses. They sell doom, they sell fear, and they convince the youth that they, the government, must be fought, and made tax the people.

People are just foolish to believe in the climate propaganda. They create the crisis, and they manipulate weather for their story. They can do much worse than create some clouds. They have been doing it for decades. We should be enjoying glorious sunshine and a blue sky but the establishment don't want that for the people of Ireland. Why?